Early Intel Macs usually do not play nicely with third party operating systems. Even though the CPU itself is 64-bit capable, the EFI boot subsystem requires 32-bit binaries. As-is, bringing up the boot-selection menu using the option key will show the Ubuntu installation disc labelled “Windows”. Selecting it, however, will hang the system. Using an external USB hard drive or thumb drive yields similarly unsatisfactory results. Those computers will only boot OS X from a USB device. 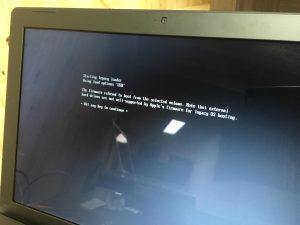 Getting “Creative” with the Installation Process

Even though the Mac stubbornly refuses to boot the installation media, I will not be defeated! Let’s list our options :

The first option seems like a nice tradeoff… at first glance, that is. I know for a fact that it simply works, having tried it before. However, many modern softwares are dropping 32-bit support (*cough* chrome *cough*), and many things simply feel slower. At this point, we have set out on a quest to install 64-bit Ubuntu, and settling for anything less would just feel like laziness, thereby leaving me with a taste of defeat and overall disappointment.

There is another way however. Come closer, as I tell ye the tale of external installation. What I ended up doing the first time I tried installing Linux on a MacBook, was to connect its hard drive to a working host system, and performing a “chrooted” installation using an arch linux bootable media. However, unlike Arch Linux, Ubuntu has a nice bootable graphical installer which sounds easier than a console installation. (At that time anyway…) So, using the graphical installer, on a Surface Pro 1 I had lying around, I was able to install the OS directly on the SSD, while incurring a still manageable mess of wires.

Installing from another computer usually causes its own lot of issues, which can range from mildly rage-inducing, to simply annoying. The Surface Pro 4, using a newer 64-bit EFI boot system, caused the wrong type of GRUB binaries to get installed on the drive. Using an existing installation on a similar MacBook, I was able to mount the freshly-installed Ubuntu and copy some 32-bit EFI binaries. While they were unsuitable for the actual drive, they still allowed me to boot to a GRUB rescue shell, from booting was possible. From there, I reinstalled GRUB, once again, to generate proper EFI stubs for the system. 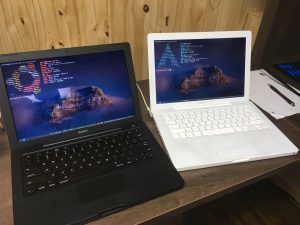 Recently, I came across an eBay auction for a 2006 black MacBook which was being sold for parts. From the pictures, the case seemed in quite good shape. A bit grimy, sure, but nothing a bit of rubbing alcohol could not solve. For a mere 11 dollars, a surprising amount of computing can be had on these days. There it is, ticking all the usual marketing boxes :

A few weeks later, it arrived in the mail, and I was in for some cleaning duty, especially around the keyboard area. 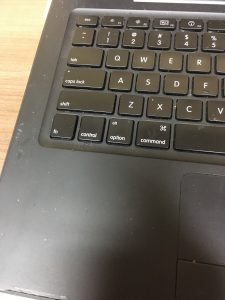 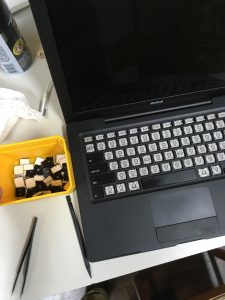 Individually removing and cleaning the keycaps seems to have done a decent job at removing what looks like food leftovers and other unidentified organic matter. I was not able to completely remove that musty smell though.

Unsurprisingly, powering the machine on using my trusty MagSafe 1 did not cause the satisfying boot chime to play. Toying around with various boot key combinations led to the conclusion that the unit had no RAM whatsoever, solving that part of the mystery. New RAM, new hard drive, and we’re rocking like it’s ’06. 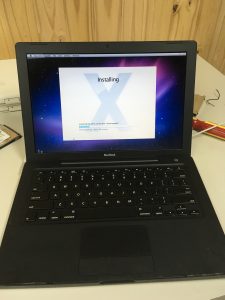 At this point, we can confirm that most of the unit is still functioning correctly.

However, this does not account for the random shutdowns and unusually loud fan, which likely indicates a thermal issue of some sort. This calls for some further investigation. 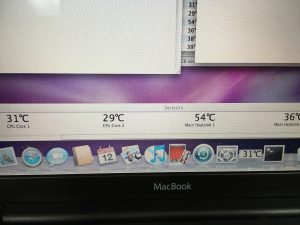 Once loaded into OSX, investigating requires reading thermal sensor data, which proved surprisingly difficult without an internet connection and on a 10-year-old deprecated OS. Luckily, I found one such tool, which would allow me to look at that data for free and without some sort of trial period.

Well, looks like we found a culprit! That “Main Heatsink 1” sure looks out of place with its toasty 54 degrees. In fact locating the actual problematic probe was a simple task, requiring a basic poking tool to poke around while doing an open-brain surgery on the patient. 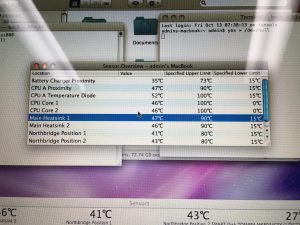 Oddly, unplugging and reconnecting the probe connector on the logic board was enough to fix its readings. Here it is, running a whisper-quiet, poor-man’s CPU stress test.

Sometimes, it almost looks as though I know what I am doing!

Since part of the plan is to use this Mac as a daily driver, 2 GB of RAM and a 10-year-old 80 GB hard drive are not going to cut it. For the boot drive, I have gone with the cheapest SSD I could find. However, that drive did not come with a spacing adapter, leaving it to rattle around inside the case. I had to, somehow, “specially improvise”. 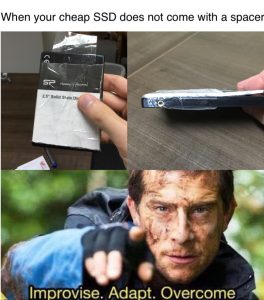 The unit came with a Core Duo T2500, which is a 32-bit only processor. This can be quite inconvenient, and can severely limit the performance in some cases. Since I also happen to have quite a few Core 2 Duo boards lying around, doing a motherboard swap was a somewhat quick and painless way of getting that extra kick when needed. It also allowed 3 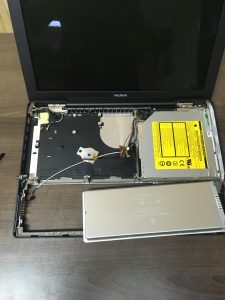 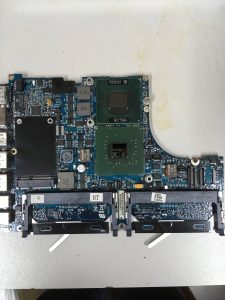 To remedy the “no battery” situation, I was able to track down another eBay listing, this time for a brand new, sealed, genuine battery for the laptop for half ifixit‘s price. Needless to say, I was impressed. That 1 cycle count was quite a satisfying sight on a 9-year-old battery. 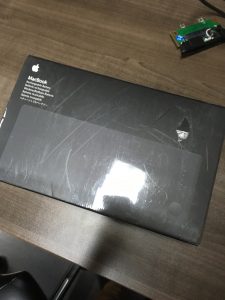 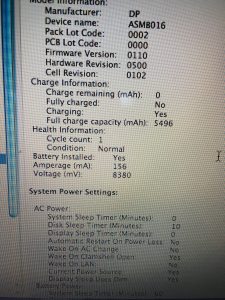 That leaves me then with a fully-functioning black MacBook, which goes nicely with the white one I have been using daily for the last year. 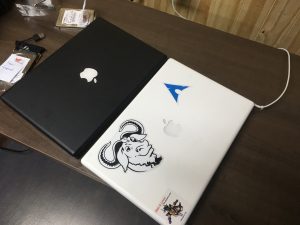 Next, I will be installing Linux on the thing, to make it truly usable in 2017.